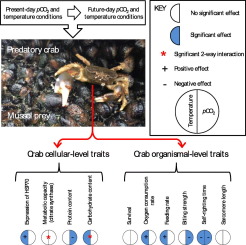 In mid rocky intertidal habitats the mussel Perumytilus purpurarus monopolizes the substratum to the detriment of many other species. However, the consumption of mussels by the shell-crushing crab Acanthocyclus hassleri creates within the mussel beds space and habitat for several other species. This crab uses its disproportionately large claw to crush its shelled prey and plays an important role in maintaining species biodiversity. This study evaluated the consequences of projected near-future ocean acidification (OA) and warming (OW) on traits of A. hassleri linked with their predatory performance. Individual A. hassleri were maintained for 10-16 weeks under contrasting pCO2 (~500 and 1400 μatm) and temperature (~15 and 20 °C) levels. We compared traits at the organismal (oxygen consumption rate, survival, calcification rate, feeding rates, crusher claw pinching strength, self-righting speed, sarcomere length of the crusher claw muscles) and cellular (nutritional status ATP provisioning capacity through citrate synthase activity, expression of HSP70) level. Survival, calcification rate and sarcomere length were not affected by OA and OW. However, OW increased significantly feeding and oxygen consumption. Pinching strength was reduced by OA; meanwhile self-righting was increased by OA and OW. At 20 °C, carbohydrate content was reduced significantly by OA. Regardless of temperature, a significant reduction in energy reserves in terms of protein content by OA was found. The ATP provisioning capacity was significantly affected by the interaction between temperature and pCO2 and was highest at 15 °C and present day pCO2 levels. The HSP70 levels of crabs exposed to OW were higher than in the control crabs. We conclude that OA and OW might affect the amount and size of prey consumed by this crab. Therefore, by reducing the crab feeding performance these stressors might pose limits on their role in generating microhabitat for other rocky intertidal species inhabiting within mussel beds.